Mandalas: Language of the Soul
The Art of Paul Heussenstamm 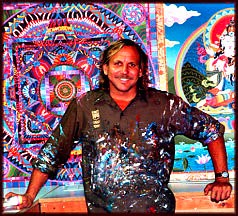 Paul’s studio works from the ancient Eastern tradition of transmission where the painting passes through the artist. Therefore the paintings are only signed on the back. Paul has two full-time assistants that have been with him over ten years. He also works closely with Master Tibetan painter, Yeshi Dorjee, as well as artists in Bali, Nepal, India and Tibet to ensure the quality of each Sacred Deity or painting.

We are located in beautiful Laguna Beach and open by appointment only. Namaste.

“We are all circles on the great mandala, and by changing the intensity of color, we clarify the fullness of each circle. Every soul is a circle with a unique combination of color and intensity. Each circle contains two individual circles with a delicate membrane between them”.

This powerful dream voice came through me in 1992 while I was painting in Hawaii. It clearly symbolizes the essence of my work as a painter where soul patterns are colorfully manifested through the ancient symbol of the mandala. Mandala‰ means circle or center and it has literally been around for thousands of years, although not well known here in the West.

As I began to open up this ancient doorway, I received access to and understanding of a soul language that has powerfully changed my life and the lives of all those who come into contact with this level of intuitive knowing. One of the true gifts of this language is a deep understanding of the patterns, symbols, and currents in Nature and how they relate to my own soul’s unfoldment and development. These insights highlight my journey into the potential of full radiance of the soul. As I look into my own soul’s pattern. I have come to see the “long body” (a way of seeing the past) of my own soul’s unfoldment.

My life as an artist truly began the moment the sperm hit the egg. I now understand that a pattern was struck within the core of my psyche, or soul, at the moment of conception. Of course, it took thirty-seven years and numerous life experiences before the pattern of an artist fully manifested in my conscious awareness.

I came into being as the genetic combination of a Jewish mother and a German father. My parents were both studying art and met at the easel. The dynamism of the postwar Jewish-German mixture created the possibility of both tension and the union of opposites. This was the beginning of the pattern of my life as an artist. My mother was an art teacher, my father a highly spiritual man, venturing into meditation and Eastern religion. Our home was constantly filled with unusual and deeply sensitive people, Sufi Master Pir Inayat Khan, actor Gig Young, transcendental painter Emil Bistram, health guru Gypsy Boots. Art and books were everywhere in our home. It was impossible for me to appreciate at the time the open and creative environment in which I had been born.